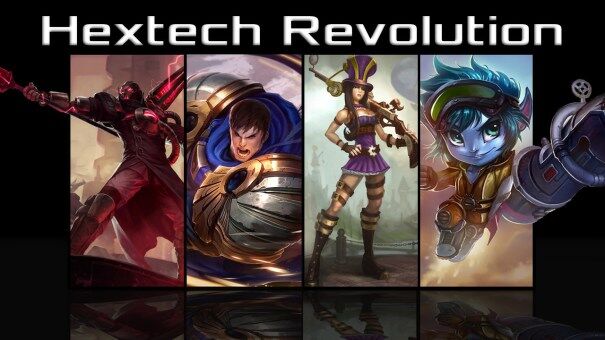 After The Discord invaded and ravaged Valoran, many regions became tainted by the Void. In the ancient desert of Shurima, Void ooze mixed with ancient Shuriman magic, which acted as a filter for the raw power of the Void's magic. This created seams of a dark sand dubbed "pyrikhos" which proved to be a powerfuel energy source for Hextech.

Piltover, Bandle City, and Zaun all fought withing a League dispute for ownership of the regions of the Shuriman desert containing the deposites of pyrikhos, intent on using the dark sand for their research. Demacia also joined the dispute, but declared that experimenting with the powers of the Void, the source of pyrikhos' power, was dangerous and placed Vaoran at risk. It hoped to deny acess and use of pyrikhos to the other factions.

Zaun, Bandle City, and Piltover all made significant breakthroughs in hextech, such as Piltover's Velcotric Rail and Bandle City's refueling of the Mothership. Zaun dominated the majority of the dispute on the Fields of Justice and created a hextech powered military force named the HexKorps, allowing it to rival military powers such as Noxus and Demacia.

During the dispute, Bandle City violated the League edict denying all access to the floating pyramids in the Shuriman desert and blasted open the entrance to one of said pyramids. This unleashed a lich that had been an ancient Shuriman princess who had been driven mad during the millenia in her tomb. Known as Nefara, she brainwashed the forces and Champions of the Shadow Isles and led them in an assault on Bandle City. Zaun, Piltover, and Demacia aided the yordles in their defense, protected the city from complete destruction, and broke her control over the Shadow Isles' forces.

In the latter stages of the dispute, Ceruleana ordered King Jarvan III of Demacia to sieze Zaun's pyrikhos mines by force, as she claimed their reckless use of the dark sands was weakening the barrier that seperated Runeterra from the Void and would ultimately lead to another massive Void invasion. Demacia gathered its allies of Bandle City and Piltover and marched on the Shuriman desert, breaking the League peace edict. With reinforcements from the Void and Noxus, Zaun used the HexKorps to destroy much of Demacia's armies and prevent them from exorcising the mines. No sooner had the fighting ended than the Void fully unleash from a rift deep within the mines and attacked Zaun and Noxus' armies positioned at the mines, proving Cerulana's prophecy true. Demacia, who was in retreat at the time, rallied with Bandle City and Piltover and joined the fight against the Void. The forces of Valoran suceeded in holding back the Void and closing the rift. The League then promptly arrested King Jarvan III after the fighting had concluded for violation of the peace edict and placed Demacia under severe sanctions.