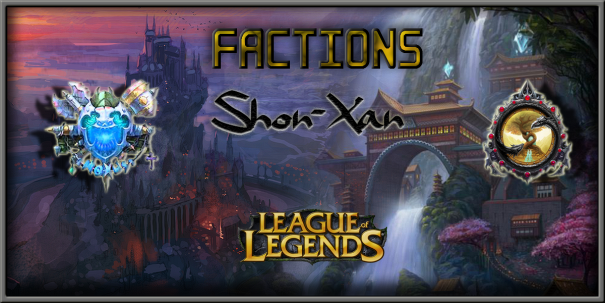 Having much of its lands devastated from the Discord's assault, Noxus had several refugees in need of a new home. The League formally encouraged all other nations to set aside at least some amount of land for these refugees, in recognition of the sacrifice Noxus made that protected Valoran from the Discord. Many refugees sought new homes in Shon-Xan, a largely unpopulated island belonging to Ionia.

Fearing another invasion from Noxus, Ionia attacked one of the settlements of the Noxian refugees. The fighting escalated to full out war involving the refugees, Ionia's forces, and Noxus' military. Noxus airdropped its elite forces on the island using Zaunite zeppelins, and used its navy to carry its main force across the sea, with intent to land on Shon-Xan and reinforce the Noxian forces already fighting. Demacia intervened and invoked the powers of Ceruleana to create a massive storm on the seas, which destroyed the Noxian fleet and the troops being transported.

The Noxian troops already in Shon-Xan were decimated without reinforcements. Noxus managed to defend the colonies it had already claimed until the League ordered the fighting to cease, through the use of Zaunite chemical bombings. These bombings did extensive damage to both Ionia's forces and the Noxian colonies, killing many refugees and making the land incapable of sustaining life.