This is from the second round of island explorations. 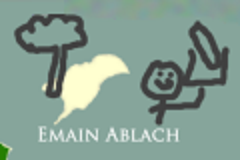 With their dominion over Avalon firmly established, the Bilgewater Captains’ Council directed its attention to the nearby island of Emain Ablach. Since its founding, Bilgewater’s nautical bent had been both a blessing and a curse. A blessing for its unrivaled fleets, both military and mercantile, a curse for the difficulty the city had always had in pursuing non-naval endeavors.

Most particularly, Bilgewater hoped that the scrawlings of the Nyrothian indicated that Emain Ablach would hold the key to remedying Bilgewater’s reliance on food imports from other nations. While the sailors and pirates of Bilgewater had fish aplenty, other dishes had to be shipped from the nations of the mainland, giving those nations a hold over the free-spirited sailors which was becoming intolerable.

As was swiftly becoming the norm, however, the initial reports of scouts revealed a situation rather different from what they had been led to expect. The island was filled to bursting with thick jungle, vegetation spilling out even over the shoreline into groves of mangrove trees which rose from the salty sea surrounding the island.

A scouting crew penetrated the mangrove forest, hoping to find some sign of the arable land indicated by the Nyrothian’s information. Instead, they found large, hostile, mobile plants which stalked them through the thick, seemingly endless jungle. These “chlorofiends” as the Bilgewaterns dubbed them, took a heavy toll upon the expedition, killing approximately a quarter of their number, and leaving the majority of the rest with injuries of various severity, many of which soon began to show signs of infection in the dank jungle climate.

The expedition reluctantly decided to return to their boats, intending to report the island as a loss except perhaps as a source of new wood for ships. However, on the final day before they turned back, a human-looking being approached them silently out of the verdant shadows, motioning for them to follow.

The primitive man led them along hidden pathways to a fortified village which seemed to be grown as much as constructed from the jungle around it. There, with the aid of the translation magics they had acquired for the expedition, the sailors learned that a number of small Nyrothian tribes had enclaves throughout the island. These tribes had only the most primitive of technology in most regards, and had no hidden farms. Disappointed, the Bilgewater expedition became interested in the natives only after the tribe’s shaman applied a poultice made from a strange plant native to the island to the wounds of some of the most badly infected wounds of their number. The wounds showed a miraculously swift and thorough recovery, and men who had been scarcely able to walk an hour before were soon reinvigorated and dancing merry jigs in celebration of their renewed lease on life, claiming that they felt better than they had in years, perhaps better than they ever had.

Covert experimentation revealed that, by itself, the plant used by the shaman did little. It was quickly determined that the island’s natives must know some subtle magic or treatment whereby the plant’s healing power could be unlocked.

The captains’ council of Bilgewater heard petitions from both Zyra and Maokai.  The Twisted Treant proposed that the magical core on Emain Ablach be adjusted in such a way that the twisted plant beasts, or chlorofiends as the sailors had taken to calling them, would be unable to survive, whilst simultaneously further enhancing the growth and prosperity of the normal (that is to say, immobile) plants which covered the island.  Zyra’s proposal was, essentially, the opposite.  She urged the pirate council to adjust the core to enhance the chlorofiends at the expense of the island’s plants, allowing Bilgewater to control the creatures and utilize them as an army.

While Zyra’s plan did appeal to their baser natures, the captains eventually decided that it might be wise, at least for the time being, to cultivate a less aggressive reputation.  Additionally, following Maokai’s plan would allow Bilgewater, for the first time in its history, to become self sufficient in regards to agriculture, and reduce its dependence on foreign imports of grain.

Each captain knew that information was always the strongest ally, and so the council dispatched Twisted Fate to watch the natives of Emain Ablach, hoping for a better understanding of the island’s plant life.  The Card Master considered this an odd assignment, as his interest in and knowledge of herbalism was close to nonexistent.  Fortunately, his knowledge of stealth was much more comprehensive, and what information he was able to glean from observing the natives was safely returned to the captain’s council.

Nami, due to her magical skill, was assigned to readjust the core, escorted by an elite detachment of Bilgewater Marines, as well as Nautilus and Katarina, to protect her from roving chlorofiends.  Gangplank, meanwhile, under his own recognizance, led a force into the jungle of Emain Ablach to clear a patch of land for what he hoped would eventually become the breadbasket of Bilgewater.

The first expedition, led by Nami, ventured forth into the jungle.  The privateers of Bilgewater, supported by their champions’ skills, both martial and magical, were successful in fighting back the green monstrosities, soon reaching the center of the island and its magical core.  There, Nami began the ritual which would hopefully bend the island to Bilgewater’s will.

Nami had made an important discovery.  She had discovered that it was remarkably difficult to concentrate on a sensitive magical ritual with Nautilus fighting nearby.

As she shaped the currents of magic with dextrous fingers, she flinched slightly and nearly fumbled a flow as a massive, humanoid plant monster flew past the corner of her field of vision, the Titan of the Depths’ anchor wedged through its chest.  The creature impacted with a tree and exploded into debris.

In addition to his lumbering about, Katarina flickering in and out of sight was its own special sort of distraction.  What was bothering the Tidecaller the most, however, was that the ritual wasn’t working.

She was performing it exactly as Maokai had suggested, but it did not seem to be having any effect on the chlorofiends.  On top of that, as she had tried to explain to the captains council, plant magic was not exactly her specialty, and she was having great difficulty in modifying the magic’s parameters on the fly.  If only she could find something familiar in this…

Wait…what’s that? She froze the flow of magic currently streaming in front of her, examining it closely.  It was pulsing with life magic, as was everything on the island, but this seemed somehow familiar…

“It’s Kelp!” she shouted in excitement, causing Katarina’s head to whip around from watching the perimeter of the clearing which housed the core.

“What about kelp?” Shouted the Noxian assassin, rather exasperated.

“It’s kelp…er… A type of seaweed.  This magic…it’s splicing characteristics of kelp with the island’s plant life.  Kelp can grow up to two feet in a single day, but it’s also resistant to mutation.  This magic is making the kelp…I mean, the plants grow much faster than they ought to, but they’re not as resistant to mutation, so sometimes they produce…” She waved absently toward a massive plant creature which had crashed through the forest wall as Katarina leapt atop it and endeavored to saw its head off with her knives.

“Knowing that…” She ducked her head back towards her work, light flashing off of the silvery scales of her fingers.  Moments later, the chlorofiends slowed, then stopped, and finally collapsed into piles of mulch.

Nami spun with a bright smile, beaming at the pirates and champions who stared at her, nonplussed.  “Finished!”

Gangplank’s expedition set off slightly after Nami’s and attracted most of the plant creatures’ attention, due to their obviously unfriendly intentions for the Emain Ablach’s plant life, as evidenced by their abundant cutting tools.

Indeed, no sooner had they begun to clear a patch of ground for farm land than the jungle seemed to come alive around them, chlorofiends streaming from the greenery like an avenging tide.  The brave sailors of Bilgewater fought well, but they were out of their element, and slowly pressed back into the center of the small clearing they had created.  Even Gangplank was reduced to shouting orders from the center of the pack after a lucky blow from a plant creature shattered his leg as thoroughly as a ball from a cannon.

All hope seemed lost when the chlorofiends began to slow, and then collapse.  Nami had completed the ritual, and the remainder of the Bilgewater agricultural force was safe.

In the aftermath of their two successful expeditions, Bilgewater established an agricultural settlement upon Emain Ablach which, bolstered by the island’s magic, began to show dividends in a fraction of the time normal crops would have taken.  This bounty would obviously prove more than sufficient for Bilgewater’s needs, and so it was decided that, in honor of their assistance, the first crop in its entirety, as well as a tithe of all future crops, would be given freely to the inhabitants of Nyroth and Emain Ablach.  This generous gesture greatly improved Bilgewater’s relations with both groups, as well as earning great favor from the League of Legends itself.

Unfortunately, Gangplank was forced to withdraw himself from the conflict for a time, citing his wounded leg.  Though he was loath to admit it, the feared captain had also had opportunity to pick up a number of tricks of the farming trade during his illustrious career, mostly while posing as a farmer or orchard keeper for one con or another.  Oddly enough, this actually made him one of the most knowledgeable Bilgewater members in the agricultural sciences, and his leadership was invaluable in the the initial stages of the farming operations.

Finally, as promised, Maokai agreed to make his name available for petition to join Bilgewater’s forces, as the ritual, as modified by Nami, had inspired given him some insight into the problem of the Shadow Isles, and how it might be partially offset.

Next Update: The Automata

Community content is available under CC-BY-SA unless otherwise noted.
Advertisement