The story of the League of Legends takes place on the planet of Runeterra. 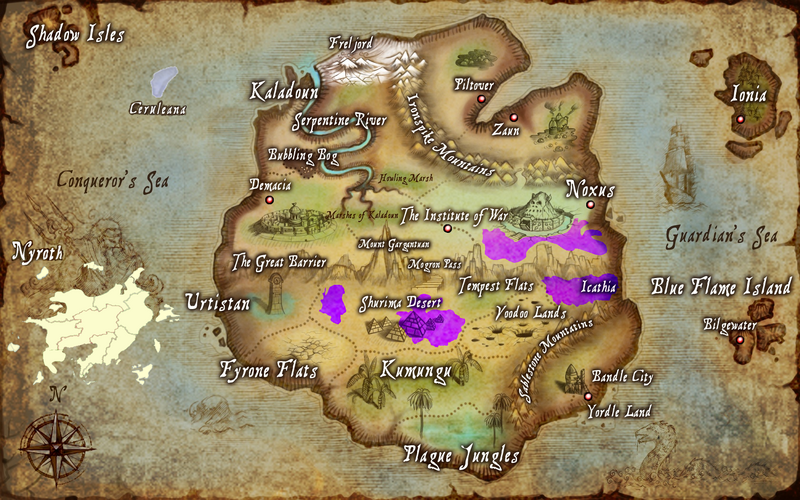 The two known continents are Valoran and Nyroth.

The League was founded by the nations of Valoran, a continent ravaged by arcane warfare.

As of 25 CLE, the factions of Valoran included:

Other regions of significance included:

Valoran is a highly interconnected place. Some speculate that, without the Rune Wars and the founding of the League, the nations of Valoran might have considerably less cause (and perhaps less ability) to interact.

Runeterra is suffused by magical energy, which travels along conduits known as leylines. The pattern of energy flow created by these leylines generates a complex arcane topography, and magic can be used to harness this energy and direct it according to the mage's will. Where leylines intersect with sufficient intensity, nexuses are formed, amplifying and "tinting" the thaumic energy in remarkable ways.

Most magic operates by harmonizing with the planet's natural flow of energy. Rune magic is that most dangerous kind of sorcery which utilizes runic inscriptions to manipulate leylines, and in some cases even to rupture them and channel the full force of the magic they contain. Rune magic is more powerful than ordinary magic by orders of magnitude. During the Rune Wars, it was used to obliterate entire armies, split mountains, boil seas, and transform mortals into beings of godlike power.

The Rune Wars so damaged the arcane foundations of Runeterra as to threaten total planetary destruction. Only the founding of the League of Legends, with its concomitant restrictions on the use of rune magic, averted this apocalyptic fate.

In the aftermath of the Rune Wars, wild magic has spread across Valoran, giving rise to strange new phenomena. Perhaps chief among these would be the appearance of Champions, remarkable individuals with abilities unrivaled by any save the legendary rune-empowered warriors of old.

In 24 CLE, yordles from Bandle City discovered the continent of Nyroth using their newly established lunar observatory.[1] Once home to a glorious civilization, it had been ruined more than one thousand years prior to the founding of the League, when an aftershock from the Rune Wars ruptured the continent's central nexus.[2]

Community content is available under CC-BY-SA unless otherwise noted.
Advertisement